Hana comes from a remote village outside of Nazret. She currently lives with her aging grandfather, who came to the school asking for help to educate Hana. She is responsible for cooking, cleaning, washing and fetching water at home. Her only chance to be a child, happens at English Alive Academy. Her family situation is very difficult and her chances of dropout are high, due to financial restarints. 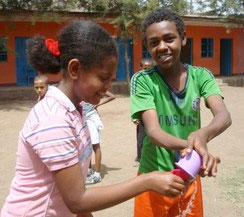 AbdulMalik has been sponsored at our school for the past two years. His mother and father are dead, leaving his grandmother to struggle to bring up his family. He comes from a village outside of Nazret and had never been to school before he got his place at EAA. He was too old to go to Kindergarten, so Stephanie and Dawit put him in Grade 1 and gave him extra support to bring him up to to standard. He has a variety of medical issues including loss of movement on the right side of his body, meaning he cannot sit on the carpet and finds some activities difficult because of limited use of his arm and hand. He spends his time outside of school, working to help support his family. AbdulMalik is a very sweet boy who is gentle with the younger pupils in his class (some of whom come up to his waist height) and shows extreme happiness to be a student at English Alive Academy! 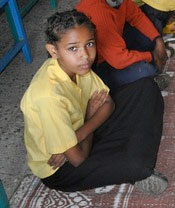 Kalkidan is a very loving and friendly child, until you start to ask questions. He only had one eye and gets extremely upset if you begin to ask why. He is a bright, articulate child who enjoys learning and playing at English Alive Academy.

This child has just begun his education in year four after spending the last three years in an Ethiopian private school. He is not an unintelligent child, but due to the rote learning style he has undertaken over the past three years, he cannot read or write in Amharic - but is able to copy beautifully from the chalkboard. Thanks to grade school, he is now in a class of 17 students and can be brought up to the educational standard he should be at for his age.

A grade four student who suffers from Epilepsy. She has been at EAA throughout her schooling and is improving her control of fitting through Stephanie and Dawits help. In a small class of thirteen children, Tigist can be removed and reassured easily when symptoms start to show. Without EAA, she would be in a dim classroom with 60 other students until she had her first fit, then they would expel her. Tigist is a withdrawn child who struggles to make friends easily, so she spends her time reading and is just beginning to take part in football games this year! 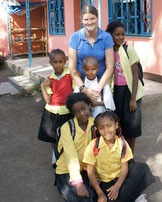 This child lost his parents at a young age and was looked after by his grandmother who approached the school to see if he could attend. He is thriving at EAA due to his enthuasiasm for learning! Unfortunately Bereket's grandmother has become increasing ill and had to leave the house to go to the clinic. Instead of falling to pieces (as most 6 year olds would), he got himself, up dressed and walked miles to school without any breakfast. Stephanie and Dawit began to bring in food for him to ensure he was getting some each day. Bereket is currently being sponsored by a volunteer who was visiting at the time and his situation continues to be monitored.